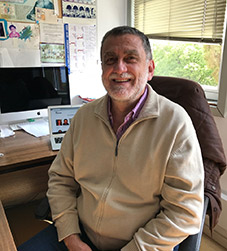 Graduated in Chemistry from Alcalá University, where he carried out his PhD work on insertion reaction of CO and isocyanides on Ta-C bonds of monocyclopentadienil complexes. He got his PhD degree in 1995 under the supervision of the Profs. Pascual Royo and Manuel Gómez. Later, he moved to Leeds University to join Prof. M. Bochmann research group for a 2 years postdoctoral stay. During this time, his research was focused on preparation of a new type of catalyst for olefin polymerization based on group 4 metals. In 1998, he come back to Alcalá University after obtaining a CAM postdoctoral fellowship, later he got a contract of the “Programa Ramón y Cajal” and form 2000 he holed an Associate Professor position first as “interino” and from 2003 as a permanent position. In 2018, he become a Full Professor in the Department of Inorganic chemistry of the Alcalá University. His current interest on research is orientated towards Organometallic Chemistry and Catalysis field. Currently, his research efforts are principally focused on:

– Design, synthesis and characterization of new types of organometallic complexes based on the early transition metal to be used as active and selective catalysts in different important catalytic processes (Organometallics, 2018, 37, 3437; Organometallics, 2013, 32, 2618;).
– Development of a new synthetic approach to obtain constrained structure complexes of groups 4 and 5 metals, and the analysis of the influence of the different structural parameters on their chemical and catalytic behavior (Euro. J. Inorg. Chem. 2017, 1060; Organometallics, 2011, 30, 2993).
– Study and development of environmental clean catalytic systems for oxygen transfer to different substrates, such as alkenes, sulfides, etc., using hydrogen peroxide in water as oxidant (Euro. J. Inorg. Chem. 2016, 2843; Catal. Sc. Technol., 2015, 5, 320; Inorg. Chem. 2012, 51, 6345).
– Design and synthesis of new kind of nanocatalysts. This work involves the synthesis of monocyclopentadienil and metalosilsesquioxano complexes bearing suitable functionals groups to be anchored over a silica nonoparticules, and the study of the supporting reactions and the characterization of the resulting materials (Inorg. Chim. Acta, 501 (2120) 119275).