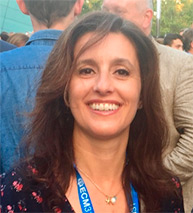 BIO: The Prof. Marta Elena González Mosquera, FRSC, is Full Professor in Inorganic Chemistry within the Excellence Program for the Comunidad de Madrid. She attained her PhD degree in Chemistry in the University of Oviedo on Ru(II) complexes bearing P-donor ligands. After her PhD, she moved to Cambridge University to join Prof. D. S. Wright group where her research was focused on main group chemistry. In 2003 she moved to Alcalá University. Prof. Marta E. G. Mosquera has a broad experience in organometallic, coordination chemistry, catalysis and polymerization processes. She has participated in more than 25 national and international research projects and her work has been reported in more than 115 papers (more than 100 in Q1 journals) and several book chapters. As well she has presented more than 100 conferences contributions (several as invited speaker). Within these research areas she has supervised 28 Master and PhD thesis. She has been invited to give talks in UK, Poland and Spanish Universities.

She was a member of the Organizing Committee of the “XXII Congress and General Assembly of the International Union of Crystallography” that took place in Madrid in 2011 (www.iucr2011madrid.es), where 3000 people attended. She has also been involved in the organization of Symposia in various conferences: ECM26 meeting (2010 Darmstad, Germany), MISCA2010 (Oviedo 2010) and XXXV Biannual RSEQ (2015, La Coruña, Spain). ECM31 (2018, Oviedo) and XXIX GE3C (2020, Vigo, Spain). Member of the International Scientific Advisory board of the 1st International Conferences on Noncovalent Interactions (ICNI2019) in Lisbon. Additional she has co-organized the Organometallic Day in September 2017 in the University of Alcala and hosted the IV CHAOS COST action meeting in the University of Alcala in March 2018. As well, she was the Chair in the organizing committee of the 1st UK-Spain Organometallic Chemistry Symposium held in Alcala de Henares in September 2019 and member of the organizing committee for the EUCOMC XXIV to be hosted in Alcalá in 2021.

She is also Guest editor for the Dalton Transactions themed web collection on Inorganic Chemistry of the p-Block Elements for the 2019 International Year of the Periodic Table. Additionally, she is reviewer for chemistry journals of the following publishers: Elsevier, ACS, RSC, Nature and Wiley. Member of the Editorial Board of the: Journal of Chemistry (Inorganic section), Frontiers in Chemistry and Crystals. She has been part of the committee for the RSEQ Castilla-La Mancha section Excellent Chemistry Awards. Evaluator for the UE research programs (VII Framework and H2020), National Science Centre from Poland, UK RSC Grants and the Spanish Agencia Estatal de Investigacion (AEI). Marta E. G. Mosquera is a Fellow de la Royal Society of Chemistry and Member of the Government Board of the Spanish RSEQ and GE3C.
She has an extensive experience supervising the research team including 5 postdocs and students at different levels, 7 PhD, 21 MSc, 11 BSc projects. As well she has participated in outreach activities for secondary schools or the general public. She was also one of the invited speakers in the presentation of the special issue that the RSEQ published on occasion of the International Year of the Periodic Table in May 2019, at the Universidad Complutense de Madrid and she has participated in Pint of Science 2019, Week of Science 2019 and “Chemistry in action” at Alcalá University (2004-2020).